Who would have thought it? On that momentous day when Jane Austen received her published copy of P&P, she had no inkling that she was going to be one of the best known authors in the English language, ranked along with Shakespeare as an essential classic. On January 27th, JA received her own copy, fresh off the press, and was as delighted with it as any author who sees their work in print. ”I have got my own darling Child from London,” she famously wrote in a letter, and the thrill of publication is there.

Sadly, that was where the thrill ended. Firstly because she’d sold the novel for a one-off fee to her publisher, and therefore never received royalties for it. Secondly, because the novel was published anonymously. 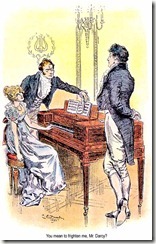 Now, knowing JA, she may well have had some sly pleasure in overhearing conversations about her novel from people who had no idea she was the author, but I would imagine there must have been many occasions when she wanted to shout out her name from the rooftops and let everyone know that she was the author. Still, eventually some people got to know who the mysterious author was. The Prince Regent himself had access to that information because his librarian, James Stainer Clarke, invited JA to Carlton House. In a gesture reminiscent of Mr. Collins himself, Clarke condescended to give JA his permission to dedicate her next novel (Emma) to the Prince Regent.

But, back to that important moment in time when the book saw the light of day. It must have been all the more exciting to see it in print since it had taken her sixteen years to get her book out. After the initial version, called First Impressions, was turned down in 1797, it was only the fact that she had already published two novels that encouraged her to rewrite and submit Pride and Prejudice. Still, she didn’t have that much confidence in it, since she sold all the rights to Thomas Egerton, who only offered her £110 pounds for it. This figure looks pathetic now in view of how many copies of the novel have been sold since then (it currently sells around 50,000 copies a year in the UK alone).

Still, it was very fortunate for us that Egerton did agree to publish the book, because in fact it didn’t do that well during JA’s lifetime. The book went into three editions but was only a lukewarm success. While people liked it, it didn’t quite fit into Regency sensibilities, who were much more used to Gothic and sensationalist novels or the type of historical novels written by Sir Walter Scott.

Now, 200 years later, JA’s popularity is at an all time high. Whew. Imagine if JA had never had the chance to hold the printed version of Pride and Prejudice in her hands all those years ago. What would we have done then?

We wouldn’t be having this conversation, would we?