The Darcy Cousins, my next Austen sequel

I was pleasantly surprised to discover that Waterstones (UK) and Amazon.co.uk already have the next novel in my Darcy Cousins series up on their website and available for pre-order! I have to say it's a thrill to see it there. I've been so busy with the launch of my US edition of The Other Mr Darcy that I'd put it on the back burner. But there it was, a clear reminder that my next book will be appearing in the very near future.

It's also a timely reminder that I need to be working faster on my third sequel! 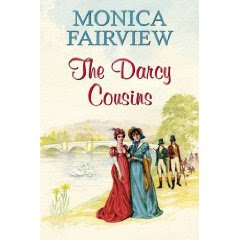 Here's the blurb, hot off the press:

What would you do if you had a brother like Mr Darcy? Overprotective, powerful, and full of pride? In this coming-of-age story, Georgiana joins forces with her lively American cousin, Miss Clarissa Darcy, to challenge the expectations forced upon her.

Will she bring scandal to that pillar of tradition, Rosings Park? Will she survive the tangles of jealousy, suspicion and deceit that result? And, after her disastrous affair with Wickham, will she ever be able to find true love?

We return once again to the world of "Pride and Prejudice" in this youthful dance through the London Season.

The Darcy Cousins will be published in the UK at the end of March 2010.