In a joint blogcast with my fellow Regency Romance author Elizabeth Hanbury,

Amanda is the author of adventurous historical romances set mainly in the eighteenth and nineteenth centuries. She also writes Jane Austen-inspired novels from the heroes' points of view, including the best-selling Mr. Darcy’s Diary and Captain Wentworth’s Diary.

Amanda’s new book – Mr. Darcy, Vampyre - is due out from Sourcebooks in August 09. Now without further ado, let’s find out more….

Welcome Amanda! Mr. Darcy, Vampyre sounds very intriguing! Can you tell us a bit about the story?

Hi! Thanks for inviting me. Mr Darcy, Vampyre is a Pride and Prejudice sequel with a difference. It starts on Lizzy and Darcy's idyllic wedding day and follows them on their wedding tour where strange and unsettling things start to happen.

What inspired you to write Mr. Darcy, Vampyre and how long did you spend researching/planning before you began?

The inspiration was really three fold. I used to watch Buffy the Vampire Slayer when it was on TV here in the UK and I always hoped they would do a Pride and Prejudice episode, where the characters got sent into the world of the book, with Buffy being Lizzy and Angel being Darcy. I think that was where the idea of Darcy as a vampyre first came from. Then, last year, the title, Mr Darcy, Vampyre 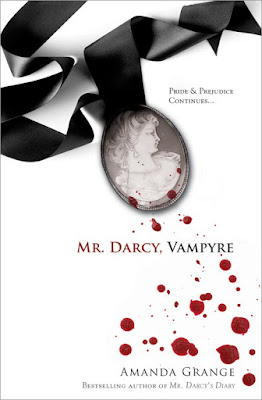 popped into my head and I loved it. Around the same time I was reading a lot of Regency Gothics as research for Henry Tilney's Diary (which I was writing at the time, but which is still not finished!) and the plot of Mr Darcy, Vampyre just came to me. Because it had been simmering inside me for so long I didn't spend any further time researching or planning, I just started to write.

It looks like this was something you've been wanting to do for some time. Clearly, you are very well versed in the vampire tradition, since the Gothics you were reading were the beginning of the genre. Some people might be wary of reading a Jane Austen story with a vampire. What would you say to them to persuade them to try it?

As long as they aren't positively set against the idea of a "what if?" story with Darcy as a vampyre then I don't think there's anything in the book that will upset Austen fans. Jane Austen herself liked the Gothic novels of her day, and in Northanger Abbey Henry Tilney says to Catherine, “The person, be it gentleman or lady, who has not pleasure in a good novel, must be intolerably stupid. I have read all Mrs. Radcliffe’s works, and most of them with great pleasure."

Lizzy and Darcy are still Lizzy and Darcy in Mr Darcy, Vampyre, but their marriage has more problems, and stranger problems, than most marriages face in the honeymoon period! There's a lot of beauty and romance in the book as well as a lot of secrets and horror and unease, culminating in an epic finale. As the back cover says, this is a test of love that will take them to hell and back.

You seem to be emphasizing the more romantic aspects of vampires. What do you think is the appeal of vampires? Why are they so seductive a concept?

That's a difficult question to answer in a nusthell. Whole books have been written on the subject! I think it's partly the sex / death correlation, partly the thrill of the unknown, partly the attraction of super powers - great strength, speed etc - but mostly the appeal of immortality.

What is your favourite vampire/gothic novel and why? 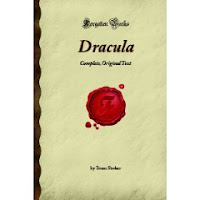 I think it would have to be Dracula because it's the first full-blown vampyre novel and it gave us all the things we now associate with a vampyre story.

Speaking of going back in time, it’s almost 200 years since Pride and Prejudice was first published and Jane Austen’s novels continue to be enjoyed by each generation. Why do you think Jane Austen’s characters, particularly Mr. Darcy, have such enduring appeal?

It's because her characters are real. We can recognise them because every generation has its cads, flirts, pompous people, lively people, impossibly good people and people who are above their company! Mr Darcy, of course, is the ideal man, not because he's rich and owns a vast estate (although that helps!) but because he genuinely loves Elizabeth. He's a flawed individual but he learns and grows throughout the book, until he's at last worthy of her, and she, too, has to learn and grow before she can be worthy of him.

Many people read Pride and Prejudice because of the romance between Darcy and Elizabeth. How much does Elizabeth feature in your new novel, and how does she like having Darcy as a vampire?

Like Pride and Prejudice, Mr Darcy, Vampyre is told from Elizabeth's point of view. She is blissfully happy on her wedding day - anyone who wants to read about a very romantic wedding day for Lizzy and Darcy should pick up Mr Darcy, Vampyre! - until she catches a glimpse of a look of torment on his face.

From that moment on she becomes increasingly unsettled as her life begins to spin out of control. It begins when Darcy changes their destination, saying that instead of going to the Lake District he's going to take her to Europe (during the Peace of Amiens), and then her familiar world begins to vanish. Only Darcy remains constant, but he is not the man she thought she married . . .

As to how she likes having Mr Darcy as a vampyre, you'll have to read the book to find out!

To return to the twentieth century: out of all the actors who have played Darcy, who is your favourite (or who do you envisage as Darcy when you are writing about him)?Is there someone who hasn't played Darcy who you think would be perfect in the role?

I don't envisage any actors when I write about Darcy, I see the Darcy of my imagination. I like all the actors who have played him in different ways, but none of them are perfect for me. I would very much like to see Jonathan Rhys-Meyer as Darcy, playing him with the sense of entitlement he gave Henry VIII in The Tudors. I think that unconscious arrogance would suit Darcy very well.

Do you think a modern, post-feminist woman would tolerate a Darcy-like alpha male, vampire or not?

I think any woman with a heartbeat would tolerate Darcy!

Well, certainly the success of Mr Dary's Diary testifies to his continued popularity, as do the various sequels that have been published. You've written a number of very successful novels in diary form. Is this one going to be first person as well?

No, this is written in the third person. There's an extract on the Mr Darcy, Vampyre blog

What you think Jane Austen would say in a letter if she read Mr Darcy, Vampyre?

I think she would say, "This is the most brilliant book I have ever read!" Oh, sorry, I went into a dream world there. I don't know. I like to think she would approve. If not, I'm going to have a lot of answering to do when I take tea with her in the after life (accompanied by Mary Crawford playing the harp).

What's next after Mr. Darcy, Vampyre?

Good question. I don't know. Well, I do, but I'm not saying!

Thank you very much for talking to us, Amanda! Elizabeth and I can't wait to read Mr. Darcy, Vampyre.