Here It is At Last! Mr. Darcy's Pride and Joy

It's been a long journey from start to finish, but here it is, finally! 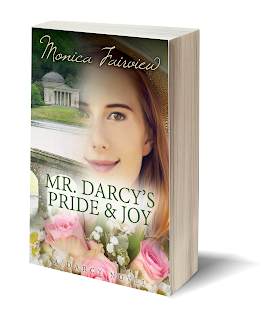 If you haven't had a chance to read the earlier books, here they are.

Meanwhile, since the pre-order at Amazon doesn't show an excerpt, here is the opening of the novel for you to enjoy.


It was a glorious autumn day, with just the right nip in the air, just the right kind of blue in the sky, and just the right kind of cream clouds soaring above the city. In short, the weather had contrived to be perfect on this most perfect of occasions. At least, that was what Mr. Fitzwilliam Darcy of Pemberley thought as he stepped out of his townhouse, deposited his top hat on his head, and twirled his walking cane by his side. He was too dignified to skip down the steps as he would have liked to, or to slide down the banister as he did when he was a child, but his heart was leaping with joyous energy nevertheless. Miss Elizabeth Bennet had agreed to be his wife -- dearest, loveliest Elizabeth -- and nothing could complete his happiness other than to have her in his arms, in his bed, and in Pemberley. For now, however, London must do, and accordingly, London seemed to be doing its best to make the day as radiant and sublime as it could possibly be.

He had asked for the carriage to be brought round, and as he emerged, it halted on the cobbled stones in front of the townhouse. He viewed it with pride. It had been scrubbed clean of the grime of London and polished until it gleamed, the gilded Darcy coat of arms glittering in the sunlight. On this momentous day, he would not arrive at the Gardiners in a hired cab. He wanted as much pomp and ceremony as he could garner in barely an hour’s notice. He had sent out for the best flowers that could be found this late in the season and ordered the inside of the carriage hung with garlands and the seats strewn with rose petals. He would take Elizabeth to Hyde Park in the afternoon and make her feel like a queen. As he stepped in, the sweet aroma infused his nostrils, evoking in him the buoyant feeling of spring time.

He could still scarcely believe it. He had proposed to Elizabeth for the third time and she had finally accepted him. All that remained was for Mr. Bennet to give his consent and for the papers to be drawn. It was a mere formality, he knew, but things would not feel settled until he had done so. In a few hours – nay, even earlier – Elizabeth Bennet, the love of his life, would be his.
He knocked on the roof to get the carriage going and immediately the horses set off at a trot. Not for long, however. Soon the clamor and the traffic slowed them down to a crawl and Darcy started to become restless. He was impatient to see Elizabeth, as well as to speak to her father. On a more mundane level, too, he was hungry. Mrs. Gardiner had extended an invitation for Darcy to join them for luncheon and he had been glad to accept, not only for the opportunity to spend time with Elizabeth, but also because he had not eaten a morsel of the Bingley’s lavish wedding breakfast. He had been too nervous to even consider eating then, but now his stomach was making rumbles of discontent.

As they drew closer to Church Street where the Gardiners resided, a commotion sounded ahead and the carriage came to a standstill. Darcy put his head out of the window and found a wheelbarrow full of lettuces had been upset and was blocking their way. They were close to their destination, and Darcy considered whether he would not be better off walking, but he did not want his newly polished boots to be stained, not today, when he wanted to look his absolute best.

“Can you turn back?” said Darcy, to Young Ebenezer, the coachman.

Ebenezer grinned. “Well, Mr. Darcy, it is quite difficult to turn it in such a tight space, but if anyone can do it, I can.”

Then it was an eternity of waiting as the carriage was slowly and painfully maneuvered until it was facing the opposite direction. After that, they still had to find their way through some of the back streets to the Gardiner’s place, which was a challenge even for Young Ebenezer’s ingenuity. They were forced to stop and ask the way a few times.

Then, finally, they were there, in front of the elegant white stucco townhouse. The blue door to the house opened, the stairs were let down, and there was Elizabeth, standing in the doorway, the sun glinting off her auburn curls. He leaped from the carriage and was by her side in a moment. She put out her hands to him and he grasped them, longing to draw her closer, but forcing himself to be content with that limited contact.

“I have missed you,” he said, drinking in her presence.

Her eyes laughed back at him. “You cannot have missed me, Mr. Darcy, surely. It has been less than two hours since I last saw you.”