Skip to main content
August 18, 2015
My first novel ever was An Improper Suitor -- published by Robert Hale in the UK. It is a sweet Traditional Regency.
An Improper Suitor has now been re-released in a boxset with four other Bestselling Regency Authors Amanda Grange, Melinda Hammond, Liz Bailey and Fenella Miller.


Regency Quintet Summer Edition is
EReader News Book of the Day!!
Woohoo! Better still, it is selling at the amazing discounted rate of $.99c or £.99p!! Time limited offer!! 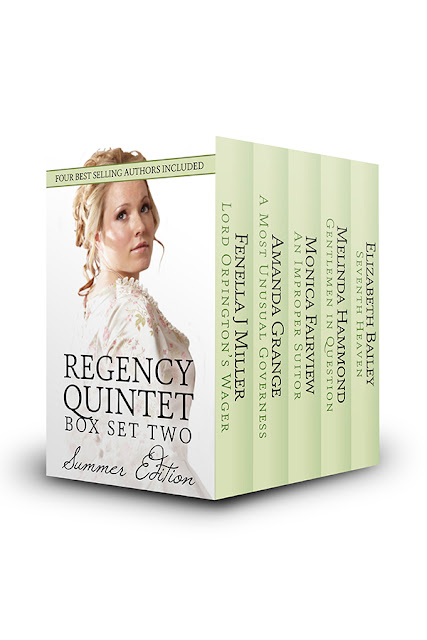 
Here's an excerpt from the novel:


The few riders at this unfashionable hour in Hyde Park moved out of their way and watched as they galloped by. Fashionable society did not approve of the Ladies’ Cavalry Charge, as Lady Bullfinch jokingly called it, but that had never stopped her.
She spurred Hamlet on. This was as close to flying that any mortal could reach. Certainly with the whoosh of air past her ears and the sensation of hovering above her side-saddle she could imagine herself a swallow in flight, or even a sparrow hawk swooping down on its prey. 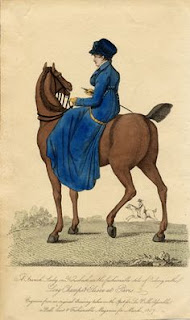 A high pitched scream brought her down to earth.
Julia checked her horse. Colours resolved themselves into shapes. Hyde Park settled back into green grass, Rotten Row, South Carriage Drive, and lines of oak.
From the corner of her eye she glimpsed a lady fighting to control her mount. It reared, then suddenly broke into a fierce gallop. The rider pulled at the reins, and for a moment it looked like the horse had slowed down. But it was only objecting to her clumsy handling. It tossed its head then bolted, running as if pursued by a colony of bees.
There was no time to think. Julia veered off the path and chased after the renegade horse, urging Hamlet onwards. Delighted to show the racing skills for which he had been bred, Hamlet lengthened his stride and accepted the challenge.
So far the girl was still on the horse, hanging on precariously. Julia willed her to remain seated for a few minutes longer, until she could reach her.
They departed the avenue of tree and headed into an area that was more thickly wooded. Julia redoubled her efforts. She did not want the girl to be felled by a low hanging branch.
Not far behind her, the beating of hoofs showed that she was not the only rider who had witnessed the event. She did not look back. Her gaze stayed fixed on the unfortunate girl, as though her eyes themselves could pin the girl to her saddle.
Then something large hurtled into Julia, emerging from behind a copse of trees to her right. The impact jolted her. She slid down in her side saddle, dangerously close to losing her seat. An iron arm wrapped itself round her throat. A hand reached out and gripped the reins of her horse, pulling them from her.
In a daze, her mind registered that someone was abducting her. She recalled horrible tales she had heard about foolish debutantes who rode in the park without a chaperon or groom. Tales of kidnappings and ransoms. Only this time, she was in the tale.
She glanced desperately around her, but there was no-one else in sight. The trees hid her from the main path and apart from the endangered rider some way ahead of her, there was not a single person who could help. Perhaps someone was around, out of view but not out of earshot. She opened her mouth to scream.
The iron arm clamped down on her mouth. “Don’t be bird-witted,” said a man’s voice close to her ear. The voice did not sound uncouth. His accents were refined, clearly those of a gentleman. But gentlemen of the ton, too, could be villains. “If you scream,” he continued. “We’ll have everyone within earshot descending on us.”
Why exactly did he think she was going to scream? To frighten the magpies?
She sank her teeth into the flesh of his palm and bit down hard. She could feel her teeth cut the skin.
He yelped. “Damnation, woman! What did you do that for?” But to her utter surprise, he did not take his hand away. He kept it firmly in place. A grudging respect for his resilience passed through her.
“If you give me your word not to start shrieking, I’ll remove my hand.” She nodded as well as she could. How did he expect her to give him her word when his palm was smothering even the tiniest squeak?
He removed his hand and examined it. She noted with satisfaction the red marks she had made. An impulse to scream as loudly as she could rose up in her, but she restrained it. She would not act dishonourably. There would be opportunities to escape him, she was certain. It was possible, of course, that he was a bedlamite. The idea gave her more confidence. She was used to dealing with unreasonable people. Her grandmother was one of them, as was her aunt Viola.
“You may wish to reconsider what you are doing, sir,” she said in a firm, no nonsense tone. “I do believe you have mistaken me for someone else.”
He did not answer. Her words had no effect at all. She tried to pry his fingers off the reins, but he held onto them fast. All his effort was concentrated on keeping hold of the reins.
Julia realized that he would soon be running into difficulties, trying to control not only his own horse, but Hamlet and her all at once. So far, he seemed to be managing, and a tiny traitorous part of her admired his skill. However, she was certain that if she kept thrashing about, he would sooner or later be forced to let go of one of the three. So she wrestled with his arm and thrashed around as much as she could, waiting for him to tire and lose his grip. 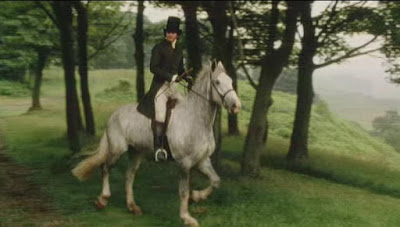 A vigorous twist brought her assailant’s face to view. He was exactly the kind of figure they warned young girls about – a ruthless-looking man with a pronounced jaw, thunderous brows and piercing black eyes. What made matters worse, he was gnashing his teeth, which made him seem like a villain straight out of a gothic story.
Then Hamlet reared. My worthy horse. He came to her rescue, attempting to throw off her assailant and escape his clutches.
“Well done, Hamlet!” she cried.
But instead of releasing the reins, the man tightened them, forcing Hamlet down. Hamlet succumbed with an angry snort. The reins pressed into her right shoulder cutting into her.
“Let go at once, sir,” she said, mustering as much arrogance as she could, but growing worried now that she would not be able to get away. “And let go of my horse. You’re injuring his mouth.”
“If you weren’t so hen-witted and just stopped struggling, I’d be able to let go,” said the villain. “I’m only trying to protect you from injury.”
Definitely a bedlamite.
“I…do … not … need … protection,” she said, very slowly, articulating each word clearly.
He did not react. He held on grimly with that iron grip, refusing to let go.
A different strategy was called for, clearly. Julia went limp. It was worth a try. Perhaps he would relax his hold if she pretended to give up.
She had not realized that going limp would imply leaning into him. Her position on the side-saddle meant that now her whole back moulded into his chest. His breath tickled her ear. The musky scent of his shaving cream filled her nostrils.
Julia felt a strange sensation go through her – a warmth and a yearning she had never experienced before. She closed her eyes, driven by the temptation to give in to that feeling.
The man shifted away and let go of the reins abruptly. “Your horse appears to have settled down.”


“Of course he’s settled down.” she said, angry at herself for letting down her guard. “I’m sure he’s a great deal more comfortable now that you aren’t mangling his mouth."