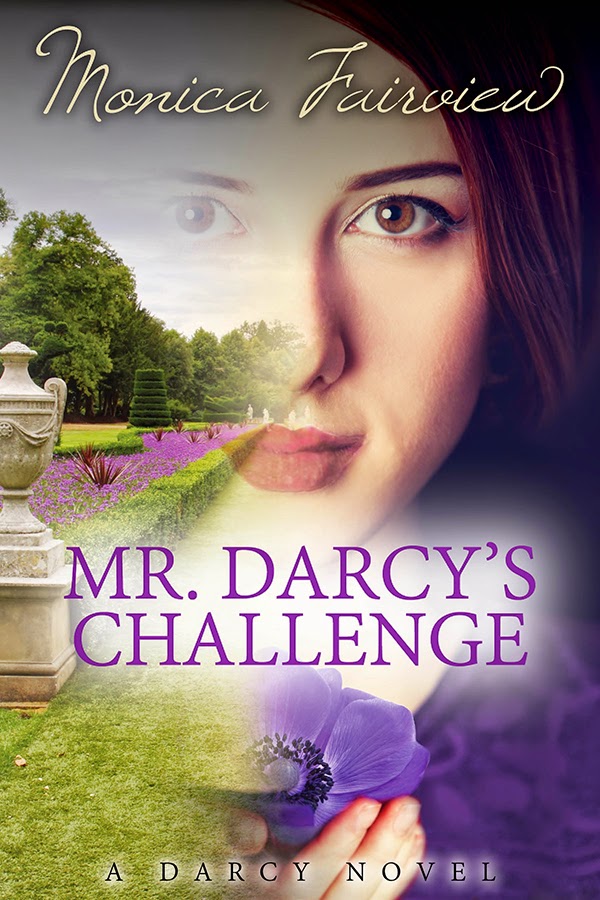 I am absolutely thrilled to be able to finally reveal my new cover for Mr. Darcy's Challenge. I loved the cover for the first in the series, and I think this one is just as pretty. Let me know what you think!

To give you a taste of the new novel, Here is the Prologue which I posted originally on Austen Variations. If you would like to read more, I have Chapter One up on Austen Variations as well, so if you'd like to head on there, take a look at it and make a comment I would really like that.

A man in possession of a fortune may be in need of a wife, but there were many ways to choose one. Writing a list of required qualities was perhaps not the best approach. That, at least, was Darcy’s conclusion as he rode away from Longbourn, his thoughts on how best to convince Elizabeth Bennet that marriage to him was not as disagreeable a prospect as she seemed to think.

He tore up the list he had made into many pieces and threw it behind him. The list of requirements for a wife was gone. Darcy was no longer bound by it, nor was he bound by society’s restrictions. He was free once again to follow the dictate of his emotions. A huge burden shifted from his shoulders. Now all he had to do was find Wickham and rescue Lydia from his clutches, then return to fulfil his pledge to woo Elizabeth until she gave him her hand in marriage.

The torn bits of paper were taken up by a light breeze. They floated back towards him like blossoms tossed over a bride and groom, as they would be tossed one day over him and Elizabeth. He imagined the two of them emerging from the small chapel at Lambton, surrounded by well-wishers, with Elizabeth by his side, smiling and radiant.

Darcy was not normally given to flights of fantasy but, fired up by the conviction that he would find a way to make things right for Elizabeth and her family, he indulged himself in an altogether pleasant daydream. He was a knight on horseback, like the Darcys of old, and an evil knight threatened his fair lady. He was riding off to challenge the evil knight to a duel, and, to prove himself the hero once and for all. He would return, having vanquished his adversary, and would find his fair lady awaiting him, her fine dark eyes full of admiration – and love. She would run out of her home and cast her arms around him. The daydream culminated with him leaning over to receive the kiss he had craved for so long.

A branch brushed against Darcy’s face and awakened him from this happy trance. He was half-asleep on his horse and likely to fall if he did not pay attention. His childish fantasy embarrassed him. How Wickham would have mocked him for his ridiculous notions! Darcy had always loved tales of valor and bravery when they were children, while Wickham had always scoffed at them. Once, Darcy had tried to creep inside the old suit of armor in the Picture Gallery at Pemberley and had been stuck inside, unable to get out. Wickham had laughed at his discomfort and refused to assist him, saying he should shout for a knight on a white horse to come and rescue him. In the end, Darcy had to bribe Wickham by promising him two of his toy soldiers in return for going for one of the servants. Wickham had agreed to the bargain, but instead of bringing someone to help Darcy, he had fetched Darcy’s father. Darcy had been whipped for desecrating one of his family’s oldest possessions and lectured for days afterwards about not taking enough pride in his ancestors.

In any case, this was not the time for dreaming. It was the time for action. He needed to sort out this business with Wickham and return, as he had pledged, to woo Elizabeth until she agreed to become his wife, even if it meant taking up residence in Meryton for the next five years.

He spurred his horse onwards. His aspirations, however, came to a sudden and complete standstill when his horse slowed down to a trot then halted, refusing to go any farther. She had found a particularly juicy clump of grass and she intended to enjoy it.

Darcy sighed, recognizing in the horse his own bone-deep weariness. Driven by Lady Catherine’s letter informing him of Lydia’s elopement and the Bennet family’s disgrace, he had ridden as fast as he could to Longbourn, intent on showing Elizabeth and her family his support. He was thirsty, hungry and sore. The mare he had hired from the last posting-inn felt much the same, he imagined. Unlike him, she did not have the impetus of being heroic. She needed a good rub-down and some rest.
Now that they had stopped, Darcy realized where he was. The uprooted oak tree lying on its side by the road signaled that he was drawing closer to Netherfield. There was the path that forked left and led across the fields toward Bingley’s estate. This was undoubtedly the way Elizabeth had taken when she walked from Longbourn to attend to her sick sister. He had not even known he had been looking for it until he found it.

At least six inches deep in mud. Caroline had pointed out the mud, but he had not noticed it. His gaze had been drawn to the brief glimpse of a fine-turned ankle that had been revealed as she had shifted her skirts self-consciously under the onslaught of probing eyes.

Hardly conscious of what he was doing, Darcy descended, tethered the horse to the oak tree and took the path left. He followed the path until he reached an old cross-step turnstile. He climbed it awkwardly and jumped down the other side. Unsurprisingly, his boots sank with a squelch into the mud. He grinned with delight at the thought that he was experiencing what Elizabeth had experienced, stepping into the very same mud that she did. Then he felt embarrassed and hastily rearranged his features into a more serious expression. Fortunately, no one but a group of brown cows clustered together had witnessed his exhibition.

Passing through hazel copse, he continued, drawn as if spellbound towards his friend’s house. Then suddenly the view opened up and a lavender field spread before him, row upon neat row of purple sprigs waving gently in the breeze. The aroma drifted up towards him, an irresistible blend of sweetness mingling with the scent of the earth. In the distance, the grey stone edifice of Netherfield sat on the slope of a knoll, looking out to the apple orchards beyond it. He stared at it, his heart filled with a myriad emotions. His gaze sought out a particular window. She had slept there, in the bedchamber closest to her sister Jane. She had been under that same roof. If he had only known it then, he would have made every effort to make a good impression on her. He had departed from Longbourn just two days later, believing he was putting an end to the whole story.

It was just the beginning.

He stood gazing at the house for a moment longer, contemplating his blind, naïve confidence that day, then turned away. He was wasting time. He had a mission to accomplish, and he would not do so stopping in the middle of a field and reminiscing about the past. He strode back to where the horse had been contentedly feasting and mounted, turning towards the direction of London.

A light breeze came up and a piece of paper drifted lazily across the green expanse to settle near the horse’s hoof. He thought of the pieces of paper he had tossed behind him and a sudden panic gripped him.

He had stupidly left his list behind on the grounds of Longbourn for everyone to see. What if Elizabeth were to chance upon them? Would she connect the pieces of paper to him? He had torn them up but the segments were still large enough to be legible. He tried to dismiss his sudden fear, to rationalize that she could not guess that it was his list, but he knew the evidence would incriminate him. Paper was not commonly found strewn around the countryside, with most of the population illiterate and without access to the expensive material. Besides, Elizabeth had seen him write on that memorable day in Netherfield. Caroline had drawn Elizabeth’s attention to his handwriting. She would very likely recognize it.

He could not afford to have her find the list. If she did, she would have nothing but contempt for his cold-blooded manner of acquiring a wife. He had to go back and retrieve the pieces at once.
He turned back towards Longbourn. The mare shook her head as if to question his sanity in deciding to retrace the same path they had taken so recently, then responded to his urgency by breaking into a reluctant trot.

As he approached the spot where he had thrown the paper, he distinguished a feminine figure approaching from a distance, walking with confident strides and swinging her bonnet in her hand.

He was too late.