Dinner with the Indomitable Dominique Raccah

The exclusive world of Gentlemen’s Clubs was invaded by a most wonderful group last night – the Sourcebooks British Book Brigade, which was almost exclusively female. Of course the Reform Club is no longer exclusively male, but looking around, with Henry James and Thackeray’s portraits – to name just two former members -- staring down at us, we could be excused for thinking so. During the Victorian period it would have been sacrilege to pass through these doors, yet here we were, with the Indomitable Dominique Raccah as our fearless leader. It’s a fitting image for the publishing world itself – with pioneers like Dominique heading publishing companies that have traditionally been male-dominated.

Being at the Reform club inevitably brings up snippets from the past. Virginia Woolf wrote about “so audaciously trespassing” as a woman on university turf, and being stopped by a Beadle : “he was a Beadle; I was a woman. This was the turf; there was the path. Only the Fellows and Scholars are allowed here; the gravel is the place for me.”

If you’ve seen the film Out of Africa I’m sure you’ll remember the scene where Karen von Blixen (author Isak Dineson) is escorted out of the exclusive gentlemen’s club. 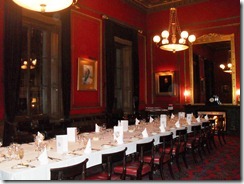 The dark polished wood, the gilt-edged panelling and the male portraits everywhere brings up in me these and other images from women's past. I can’t help thinking of the past because the Reform Club is a spectacular reminder of bygone times. But of course it’s also a tribute to reform, as its name testifies. It was here that great politicians and thinkers of the last two centuries discussed their plans to re-make history and re-imagine the world –  from figures such as Gladstone,  to J. M. Barrie, E.M. Forster and H.G. Wells.

Being able to step onto that “turf” from which we as women were once barred is a wonderful thing. It makes being in the Reform Club as a member of Sourcebooks, a publishing company committed to women writers, a very special thing. What a wonderful space to celebrate the achievements of women since the beginning of the twentieth century.
Though I’ll admit it. This wasn't the only thing on my mind yesterday, as the champagne flowed, the fireplace flickered, laughter rang out and conversation danced merrily around the table.
Email Post
Labels: Amanda Grange Dominique Raccah Francesca Simon Gabrielle Kimm Jane Odiwe Phillipa Ashley Reform Club William Makepiece Thackeray