It's the height of the lavender season and what a relief it is to spot a sea of flowing blue-purple on an undulating hillside not too far from Croydon, which achieved notoriety in the news this week as fires raged and looting and rioting became the order of the day. The Surrey Downs (the foothills, not the real downs) are an ocean of calm after the nervous tension of the week. There is something hypnotic and heady about walking about with lavender surrounding me as far as my eye can see. A magnificent calm descends over me. Sight and aroma combine to cast a much needed soothing spell, smoothing away the jitters. I weave in and out of the neat rows, smiling at others who clearly feel the same.
This is one of the charms of the English countryside (even if this field is more urban than country). A sign points to the field with the words Public Footpath (or it could have been Bridleway, same thing, since I don't ride). This means, ultimately, that you're allowed to ramble all over the place. 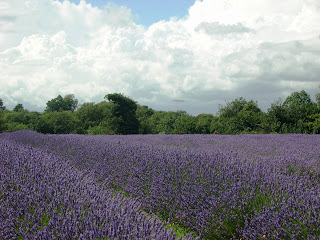 There's some comfort, too, in knowing that lavender grew in the same location through the 18th and 19th century right until the late Victorian era. In fact large segments of the area I live in were once swathed with lavender fields. What a sight it must have been!
Unfortunately, with the growth of the perfume industry, the simple aroma of lavender was rejected as too homegrown and simple. It came to be associated with the Victorians (and the Edwardians) and times past, conjuring  images of old fashioned cupboards, knitted hangers with lavendar bags. Or posies and handkerchiefs sprinkled in lavender to cover the rank smell of sewage when heavy rain flooded the streets of the old industrial cities. My grandmother -- who died last year at the grand old age of almost 101 -- certainly used them to ward off moths.
As civilization grew more complex and sophisticated, simple perfumes like lavender were regarded with contempt. With advertisements hawking expensive perfumes to stimulate your sexual appeal , poor lavender with its association as a moth repellent (even more old-fashioned than moth balls) didn't stand a chance. Lavender was consigned to a dusty and forgotten attic. The lavender fields all but disappeared into the history books. 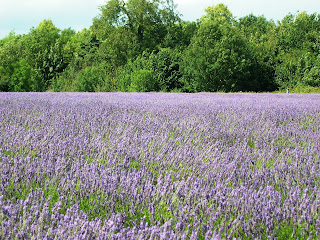 
Which is why I was able to take a friend visiting from the US to see the glorious (and organic) Mayfields, lying in a blaze of purple on a small hillside.