Thoughts on Bright Star: Between romantic poetry and Jane Austen

Laurel Anne's post on Jane Austen's Regency World Magazine reminded me that Bright Star had been sitting on top of my tv for some time, and that it was time to watch it. Bright Star is the story of the doomed poet John Keats' (Ben Whishaw) relationship with his next door neighbor Frances/Fanny Brawne (Abby Cornish).

Having seen Jane Campion's The Piano some years since, I knew this was not going to be steamy fast-moving romance. The music of the opening credits sets the tone of the film, and that never wavers: quiet, dignified, beautiful and poignet.


For those of us used to watching Jane Austen adaptations, the film is a feast for the eyes -- particularly at the beginning when Fanny channels all her creative instincts into creating one lavish costume after the other. The outdoor shots are heavenly (literally, if we are following Keats' poetry) particularly the spring shots. They are especially delightful when we see things through Keats' eye: whether it's 'Ode to a Nightingale' as we hear birds sing, "My heart aches, and a drowsy numbness pains/My sense, as though of hemlock I had drunk," or the superb shot of Keats "floating" on a tree full of blossoms.

There are echoes of Jane Austen in the film. Fanny's supreme self-assurance at the beginning is reminiscent of Gwyneth Paltrow's Emma, and I couldn't help comparing Margaret/Toots (Edie Martin), Fanny's sister, to another Margaret in Sense and Sensibility. (Is it just me, seeing Jane Austen everywhere, but doesn't the still on the left remind you of Jane Austen's portrait?) The restraint of the lovers is also reminiscent of Jane Austen, though there is no smouldering Mr Darcy here. This is where the film departs from Austen. The romance itself is not played out Jane Austen style. After all, it's about a Romantic poet, and the poetry speaks for itself

In this sense the film captures beautifully the often confusing tension in Regency England between the new wave of Romanticism -- the cult of nature and stormy passion -- and the ideals of Reason and Wit which were still highly valued by society, and which Jane Austen embodies to a large extent. 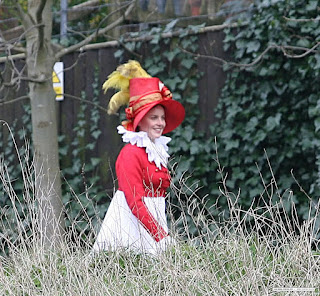 Jane Campion makes this explicit by having Fanny argue at the beginning that she is more interested in wit than in poetry. The transformation that comes over Fanny as she moves from one to the other is reflected in her costumes; her elegant, crisp, and carefully crafted outfits gradually become looser, with large floppy shirt collars, looser hair and more down-to-earth clothing.
(I'm wondering if the hat that gave Georgiana so much grief in The Darcy Cousins wasn't something like this?) 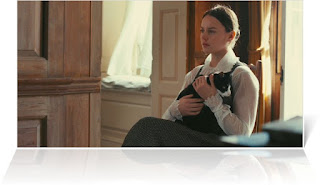 Jane Campion also captures a specific aspect of Romanticism that is reflected in many of the romantics' works -- their obsession with death, a particularly poignent aspect of their writing since several of the major romantic poets died young: Keats at 25, Shelley at 32, Byron at 36.

Most moving, I thought, was how the film doesn't shy away from showing the raw and absolute nature of poverty. However much we might want the lovers to be together, we know that the grinding poverty John Keats faces is a destructive force, and very different from the genteel 'poverty' Fanny is used to.

A film well worth seeing for the wonderful way it converts the Romantic sensibility into images, and for a love story that will cost you a box of tissues.