The Other Mr Darcy now available on Kindle, and Volcanic Ash 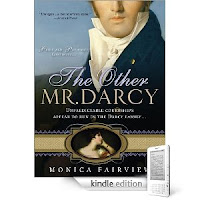 Just discovered that The Other Mr Darcy is back on Kindle again. I know some of you were asking about that. The Darcy Cousins, by the way, is already on Kindle.
The big story in the UK now is the Volcanic Ash that is descending upon us. It's certainly ironic that this happened just after my last post! I promise you I can't predict volcanic eruptions, though I did once have an incident in which I "predicted" an earthquake.

I was living in Corvallis, Oregon, at the time. I was supposed to meet a friend of mine for our regular brisk walk, but when she called me to agree on the time, I told her I wasn't up to it.
"I don't know what it is," I said. "I feel kind of shakey, as if the ground is unsteady under my feet. I don't feel good at all."
My friend laughed. "That's the worst excuse to get out of exercise I've heard yet!"
I protested that it was true, but I couldn't quite explain it.

That night when I was sleeping, I woke to the sound of rattling objects. I turned on the light. My books on the shelves had moved, and several of them had fallen (of course, I'd look at my books first!). I was puzzled, but since nothing else happened, I shrugged and went back to sleep.

The next day my friend woke me up with a excited phone call and told me there had been a mild earthquake the night before. "I can't believe it! You know, you can make a fortune, being able to predict earthquakes before they happen."

I don't know if I can, since I've never been in an earthquake again, very fortunately.

Meanwhile, I'm daily awaiting one of two things: the ash itself, which has already fallen on numerous communities in Scotland, and the spectacular sunsets painted by Turner and featured in The Darcy Cousins. 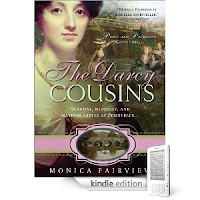 It's oddly silent outside. There is the constant rumble of traffic, of course, but I didn't realize how much the thundering of airplanes intrudes on the corner of our consciousness. I live about 45 minutes from Heathrow and about 20 minutes from Gatwick, and although planes rarely take a direct route overhead they're still always there, somewhere in the distance. Now with all the airplanes grounded, the skies are soundless. When there are no cars passing by, the silence is eery, reminiscent of by-gone times.
I wonder how many other things intrude on our consciousness without us noticing, and we become aware of them only when they're absent? That's if we don't think of all the unseen and unheard things that pass through us and around us -- microwaves, satelite signals, ultraviolate rays, and all the sounds that are just beyond our hearing.
Meanwhile, I wait for the ash to descend, and for the airplanes to ascend again. Their absence seems like a loss. I want them again, hovering above me like great birds, taking people across the world to their various destinations -- holidays, new beginnings, escapes, tragic events, and mundane business trips -- the spectrum of human emotions flying above us like self-sufficient worlds.
The Day the Planes Stood Still.
Email Post
Labels: Darcy Cousins Kindle Other Mr Darcy Kindle volcanic ash