One could call 1814 the Year of the Hat. The fashionable young lady of the time was quite spoilt for choices, some of them quite extreme. There was always the turban, which was still in, though in lighter materials. But if you really wanted to be all the rage, then you had to be aware of two things. The first is that height was important – some of the hats could easily compete with a man’s top hat for height. The second was that elaborate trimmings were essential. If you were able to combine flowers with lace with different coloured silk, then you could count yourself successful. (Image from Clarmont College Collection)

Which leaves young ladies such as Georgiana Darcy with a difficult choice. Should she be fashionable, or should she not? Her cousin Clarissa advocates that she needs to take more risks with her outfits, and convinces her to buy a rather conspicuous hat. But is it the right choice? The following excerpt from The Darcy Cousins illustrates the difficulty of making such onerous decisions. 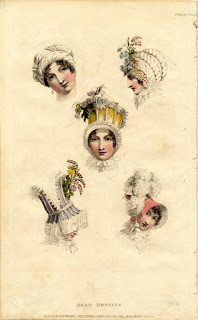 “We have bought ourselves new hats,” said Clarissa, glancing sideways at her reflection in the window. “You must tell us what you think. You must be perfectly candid, mind.”
“I congratulate you on your choices, for you look very dashing indeed,” said Mr Channing. “You, too, Miss Darcy. Your hat is charming, but of course, so is its wearer.”
His eyes lingered on her face. She had intended to give him a dazzling smile, but her smile wavered under his intense scrutiny. He continued to gaze at her until Clarissa thanked him very prettily, and he turned to respond to her.
Still, Clarissa could not be satisfied when the other gentleman in the carriage had not yet expressed an opinion.
“Mr Gatley, you have said nothing.”
“I think your turban very pretty. It suits your character well, and it is exactly what I would have expected you to wear. I cannot make a judgement on Miss Darcy’s hat, however, for it is too modern for an old-fashioned gentleman such as I.”
Considering the exquisite and expensive tailoring of his navy waistcoat, matched with a cravat that was a masterpiece of white perfection, one could be forgiven for thinking him more concerned with fashion than he admitted.
Georgiana understood his comment as a rebuff, and turned her face to hide the conflicting feelings which were surely branded on her face. On the one hand, she was chastised, for she knew she should not have allowed Clarissa to convince her to buy the hat. She should have trusted her own judgement. On the other hand, she – very naturally – resented the slight.
“Look at what you have done now, Mr Gatley,” said Clarissa, “you have made my cousin sad.”
“Come, Gatley, must you be so thoughtless?” said Channing. “Surely you can do better than that.”
“I am not as skilled at flattering ladies as others of my acquaintance are,” he said, his colour heightened. “I never study my compliments. When I pay tribute to someone, it is because I mean it.”
Georgiana, further annoyed now by Clarissa’s interference, deemed it time to speak, if only to show how very little Mr Gatley’s opinion mattered to her.
“Some gentlemen seek to stand out from the crowd by professing to be harsher than others, and so lay claim to the higher moral ground. That is how they assert their own superiority,” she said, in a light, dismissive tone. “In such cases, I believe, it is far better not to give their remarks too much importance by taking them seriously.”
“How so, Miss Darcy?” cried Gatley, “When I am endeavouring to be as sincere as possible?”
“By George!” said Channing, bursting into laughter. “I think she has your measure, Gatley!”

© Monica Fairview. This text may not be reproduced except with the express permission of the author.
Email Post
Labels: Georgiana Darcy The Darcy Cousins