Proofs and Covers for The Darcy Cousins

Today I received the proofs for The Darcy Cousins, my second book in the Darcy Cousins series, and I'm thrilled, as it means it will soon be time for the novel to be released in the USA. The date is set for April 1st, which isn't an April's fool trick (I hope). 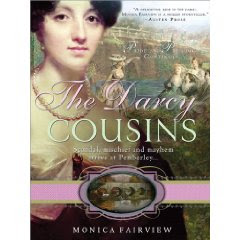 Quite a change from The Other Mr Darcy, isn't it? I love the young lady in the foreground. She has very expressive eyes.

Many people are under the mistaken impression that writers decide what they want on their book covers. The truth of the matter is that many writers have little control over what goes on the cover of their books.

At Sourcebooks, however, I was lucky enough to have had some imput, which is why we now have a young lady on the front. The original cover was like this:

I must say, this cover is quite lovely. It captures the playfulness of the novel really well. I especially like the colors. But the costumes weren't right.

Since it would have been impossible to redesign the cover entirely at this stage (and in the book industry, time is always short) the thoughtful young lady was introduced.

The Robert Hale version (UK) of the novel couldn't be more different. This cover uses original artwork from the artist/book designer: 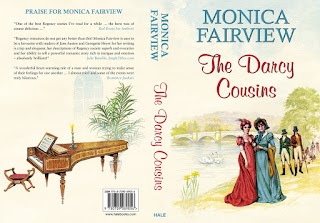 Isn't the piano wonderful? And I love the sense of conspiracy between the two young women, with the young regency gentlemen strolling casually in the background.

Both covers are based on a scene in the novel where a group of young people go for a boat ride on the Thames at Richmond.

What do you think?