The Most Romantic Character Is:

I popped in to see the results of the poll conducted at Laura's Reviews for the most romantic male character in literature, and discovered that Jamie Fraser (Outlander) was the winner, followed by Rochester (Jane Eyre), with Mr Darcy as third.

Somewhere at the bottom of the list was Sharpe (Sharpe's series), which puzzled me, living in the UK as I do, since Sharpe is very popular over here, and Bernard Cromwell's books are just about everywhere. Then Laura mentioned that she hadn't seen the series and I realized that perhaps people in the US haven't had as much exposure to it.

I confess I haven't read many of the Bernard Cromwell novels, mostly because I have so many other books I want to read first, but the few I have read are goldmines of information about the everyday realities of the Napoleonic wars from the point of view of an ordinary soldier, albeit a very "heroic" one. However, I did devour the Collector's Edition, which is 14 episodes from the series, often going through two or three episodes in a row. 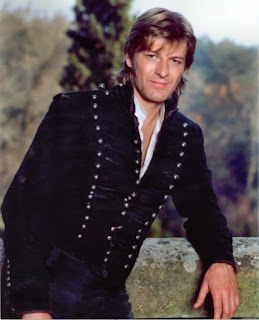 Sharpe is a commoner who manages, through a combination of intelligence, courage, foolhardiness, good humour and luck, to rise up through the ranks, but the struggle between him and the "gentleman soldiers" and officers who have bought their way to the top is very much a reprentation of an eternal class struggle. Played by Sean Bean, Sharpe comes across as a perfect mix of sensitive and caring along with tough and doggedly enduring. Along with his constant companion, the Irishman Harper (Daragh O'Malley), who has to endure all kinds of attacks and slurs because of his origin, he refuses to accept the limitations placed upon them, and stubbornly insists on holding his own no matter what is thrown at him. 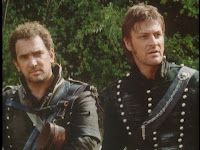 Note that Sharpe and Harper here aren't wearing the red uniform the younger Bennet sisters are so enthusiastic about. Sharpe does wear the red uniform earlier in his career, but later becomes one of the elite Riflemen whose uniforms in "rifle green" were designed by their founder Coote-Manningham to provide more camoflage than the very distinctive red!

It's not a coincidence that Bernard Cornwall "frees" Sharpe later from the red infantrymen uniform, as he gives us a very unromantic image of it, particularly in the context of India. Here's his description: "Their coats were wool, designed for battlefields in Flanders, not India, and the scarlet dye had run in the heavy rains so that the coats were stained white with dried sweat. Every man in the 33rd wore a leather stock, a cruel high collar that dug into the flesh of his neck, and each man’s long hair had been pulled harshly back, greased with candle wax, then twisted about a small sand-filled leather bag that was secured with a strip of black leather so that the hair hung like a club at the nape of the neck. The hair was then powdered white with flour, and though the clubbed and whitened hair looked smart and neat, it was a haven for lice and fleas." (Sharpe's Tiger) Of course the sweat and lice were not an issue with the officers stationed in Meryton.

Fortunately, in the section of the series I saw, Sharpe didn't have to deal with the restrictions of that uniform, though he is constantly in conflict with his superiors (especially the titled nobility who do little fighting themselves) over what constitutes a sensible uniform for a serious soldier.

The only thing I don't like about the series is the inconstant nature of his "love" relationships, since he seems to have the capacity to fall in and out of love a bit too often for my taste. But that's the nature of a series, which compresses the novels and has to choose what to focus on. Besides, I suppose -- and I can just see the producers saying that -- how is Sharpe to be a real hero without having women throwing themselves at him? Though admittedly he does tend to go for the stronger, more independently-minded women, such as the Spanish resistance fighter Teresa (Assumpta Serna), which is a point in his favour.

Other than that, the Sharpe series is a wonderful way to find out more about Regency society outside the ballrooms and enclosed spaces of London society.

I didn't vote for Sharpe in Laura's Review, mind you, because of course my first vote goes to the Darcys -- Mr Darcy (the original, of course, even if I love my Robert) and Mark Darcy from Bridget Jones' Diary. But really, if you're looking for a bigger than life, shrewd, and ruggedly handsome hero, then Sharpe's the one.