Today we woke up to find a thin mist spreading over everything. It's the first "fog" we've had here in southeast London this autumn. Fog is unfamiliar enough that my daughter looked out of the window with shining eyes: "Jack Frost is here!" she exclaimed. "It means it's almost Christmas!" There wasn't a trace of frost anywhere, so clearly this strange weather event is very unfamiliar.

Which got me thinking about the famed London fogs. What happened to them? My father described fogs in the fifties so thick that you would lose your way home, wondering around and around for hours without being able to see further than your hand. Even allowing for some exaggeration, we know London is notorious for its fogs. Jack the Ripper would not be the same without the swirling fog, and where would Sherlock Holmes be without the London fog? What of the famous pea-soup fog or pea souper? Or, as it was called in the 19th century, the London Particular?  There are so many descriptions of yellow-green fog in literature that I can only puzzle over the current day absence of this natural phenomena. 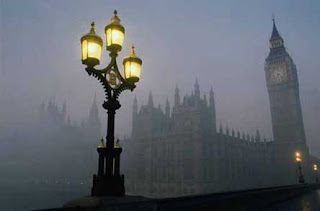 A little research reveals that, far from being an exaggeration, my father's description of the fog was in fact understated. In December 1952, over a period of four days, the fog was so thick that people claimed that they could not see their shoes. It was virtually impossible to go anywhere. People abandoned their cars on the road. Not only that, but thousands of people who suffered from respiratory diseases died, their lips turning blue from lack of oxygen.

But far from being a natural phenomenon, the yellow London fog was made up of sulpher compounds resulting from the burning of coal in factories and households. After the Clean Air Act of 1956, which introduced smokeless zones and limited the use of coal particularly for domestic purposes, the pea soupers disappeared.

Which is why my daughter, a couple of generations later, can look out of the window in south east London and fail to recognize the real natural phenomenon called fog.
Email Post