I've been trying to catch up on my writing, so I haven't been here as often as I like. As NaNoWriMo winds down, though I haven't met my goal of 50,000 words in a month, I'm satisfied that it's been a productive experience. My emotional pendulum swings between disappointment and a sense of achievement.

In the meantime, I haven't been visiting any National Trust or historical properties for a long time because the weather has been so atrocious. I really jinxed myself (and the whole of England with me) when I wrote that piece a while ago about the myth of rain here in England. Just to prove me wrong, it's been pouring almost continuously for what seems like months now, though I know it must only have been a couple of weeks. Everything is growing damp and moldy, though the famed English verdure is magnificent -- the grass looks almost edible, it's so crisp and fresh. The sheep must be grazing very happily. I wonder if they're bothered by the rain?

I can afford to joke about it, because it's just been an inconvience for me. But for people in Cumbria, the rain is far from just an inconvenience. The flooding has been devastating, destroying many traditional businesses in hard-hit Cockermouth as bridges collapsed and water took over the streets. 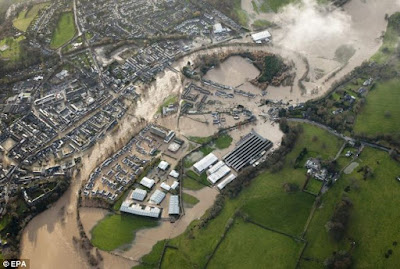 I was particularly heartbroken by the plight of a bookshop owner in Cumbria, Catherine Hetherington, who returned after being evacuted because of the flooding, only to find all her books completely destroyed. 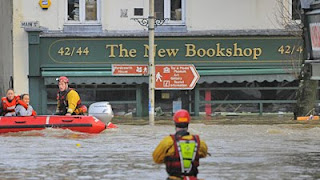 Despite its name, the New Bookshop has been in Catherine's family for 40 years, and was just renovated last year.