Halloween and... our last Pride and Prejudice question

Well, it's Hallowe'en, and apart from the spooky stuff, this is also the night when the barrier between the future and the present is at its thinnest, and you can try and divine who your future life partner will be. At the turn of the 19th century, there were many different traditions to determine this. Here's one of them, from Robert Burns' 1786 poem, Halloween. Jane Austen may well have read this poem, since we know she read Burns' poetry.


Burning the nuts is a favorite charm. They name the lad and lass to each particular nut, as they lay them in the fire; and according as they burn quietly together, or start from beside one another, the course and issue of the courtship will be.-R.B.

Are round an' round dividend

An' mony lad an' lasses' fates

Are there that night decided

Some kindle couthie side by side

And burn the gither trimly;

The Jane Austen's Centre Online Magazine has a great article on All Hallow's Eve. Click here to view.

By the way, traditionally, turnips and not pumpkins were carved, but were quickly abandoned once people discovered how much easier it was (?) to carve pumpkins. 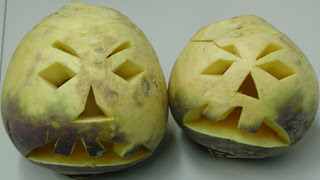 Once the candle is lit, the result is apparently much more eerie than a pumpkin 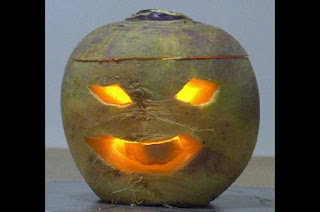 Jane Austen presented herself very modestly and famously as a miniature worker on her "bits of ivory".  Subsequent Victorian biographers entrenched her image very firmly as Auntie Jane, a secluded spinster who scribbled her little books on a little table and consequently was confined to writing about the domestic matters of women.

How would you account for Jane Austen's appeal today? Do you agree with this assessment of her as an author? Does the rise of Chick Lit (significantly, beginning with Bridget Jones' Diary) have anything to do with her current popularity?

How much of that image is true?

(PS You may rant and rave if you wish, it's your last chance!)