Well, the new BBC interpretation of Emma is over. Just when I was really getting into it! As I don't want to introduce any spoilers (as if everyone doesn't know what happened!) I won't talk about it in any detail except that I found it very satisfying. Jonny Lee Miller could never rival Mr Darcy for romance, but he plays his role as Mr Knightley admirably. Certainly this is the most romantic production of Emma I've seen. I really loved the way Garai's Emma developed gradually from a really naive, overconfident young woman into a responsible adult who recognizes that people's lives are not to be trifled with, and realizes the very serious consequences of doing so. 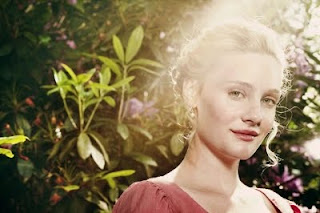 I can't help marvelling at the versatility of Sandy Welch, who can move from the dark grit of Gaskell's North and South and the intensity of Jane Eyre to produce a light and airy piece like Emma.

My overall evaluation: Too slow at the beginning (personally, I'd cut the first 20 minutes), and perhaps too rushed at the end, but a very memorable production and one that I know I'll be watching a few times! I learned a lot about Emma from it. This is a very cheerful and heart-warming interpretation, not for the stricter Jane Austen purists, perhaps, but nevertheless a very original and insightful approach.

Speaking about romance: It’s been said of Jane Austen: “she refuses to romanticize romance”. What do you think of this statement? What does it mean? Do you agree with this perspective?