I often think the acid test of a film is what you remember about it the next day. The scenes that stand out in your mind are the ones that are the most powerful, usually, and the process of evaluating the film comes about when you re-evaluate those scenes and put everything together.

So what do I remember most about the Harry Potter film today? Dark, tumultuous clouds, a bridge collapsing, Dumbledore’s blackened hand, Ron Weasley, Malfoy's anguish, and a dead bird.

Oddly enough, when I try to remember Harry Potter himself, I remember: 1) The opening scene with the young waitress. 2) Harry taking Dumbledore's arm 3) Harry hiding under the floorboards in the tower, watching passively as a wand is lifted.

Put all those ingredients together, and you've got an assorted smorgasbord of a film. 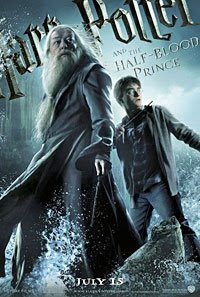 Not that it wasn't enjoyable. It was. The cinematography was vivid, the special effects striking. But overall I would have to say that there was something lacking. Motivation, emotional impact, and character (especially when it came to Harry) took the back door to the visual aspect of the film. The two characters who take center stage, if anyone does, are Ron Weasley and Malfoy.

And I have to say I was particularly disappointed in Hermione. Somehow she has been transformed from the spunky little girl full of confidence in the two earliest films into an awkward, diffident young woman whose body language radiates uncertainty.

I can see that the complexity of plot and the abundance of characters in JK Rowling's novels as they get longer and longer become much harder to translate onto the screen. Certainly, this is evident in The Half Blood Prince. The decision to split the next book into two films makes sense. I wish they had thought of it before. The Half Blood Prince would have been much richer (in all senses of the word) for it.
Email Post