As  most of you already know, the first novel I ever published was a Regency Novel, An Improper Suitor. My publisher was Robert Hale, a successful publisher who had been in the business since the 1920s. Mr. Hale was a lovely, old-fashioned publisher who actually read every manuscript that was considered for publication and interacted personally with his writers. His publishing company had a specialized market which was supplying hardcovers to libraries. He had been doing this for many years, but as the budgets for libraries shrunk, the business was hit hard.

I'm indulging in some reminiscing now because I'm in the process of revising An Improper Suitor to put it out with a new cover, and I'm remembering the thrill of first receiving a letter of acceptance from Mr. Hale telling me he'd like to publish my novel. Sadly, Robert Hale closed their business last year around this time, but I remember Mr. Hale telling me to stick to writing Regencies which is what I was good at, and not to get distracted writing Jane Austen sequels. He did publish my first two P&P sequels anyway, but I can't help thinking sometimes about what he said.

Well, I have gone back to writing some more Regencies, mostly because I was invited to be part of a lovely group of ex-Hale Regency writers and I'm more than delighted to participate in their box-set project. So this year I've written a new novella for the Regency Romantics Winter box set, Dancing Through the Snow. It's already out for a very reasonable price, considering there are six of us. 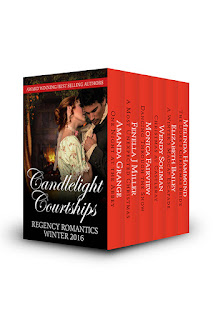 A Collection of 6 Regency Romances From Bestselling Authors

One Night at the Abbey – Amanda Grange
When Miss Hilary Wentworth takes up an appointment at Carisbrooke Abbey, she finds it embroils her in a winter of mystery and romance. What secret haunts Lord Carisbrooke? And when Hilary uncovers it, can they find the love and happiness they deserve?

A Most Unexpected Christmas - Fenella Miller
Lydia Halstead has no desire to remarry or to attend social gatherings. However, she is persuaded to accompany her brother and his family to Fakenham Manor.
Lord Theodore Fakenham is not pleased to discover his mama has arranged a Christmas house party without his permission. This is not an auspicious start to the festive period.
An infestation of mice in the nursery, a riotous snowball fight and an accident in the study make for a very unexpected Christmas.

Dancing Through the Snow – Monica Fairview
Amelia Neville is convinced she has found the perfect husband, but unfortunate circumstances throw her into the company of the distrustful Duke of Sutcliff. Forced to attend the Duke’s Christmas house party by her matchmaking Mama, Amelia knows she’s going to hate every minute. But romance is in the air in the snowy landscape…. A traditional Regency romance with a touch of laughter.

Christmas at Castleray – Wendy Soliman
When Alisa Langdon and Chase Beaumont are invited to Castleray for Christmas, they expect a peaceful holiday. But instead they are attacked on the road and then Alisa’s servants are ostracised in the local village. Can Chase and Alisa discover who attacked them? And can Chase ignore his growing attraction to Alisa, who appears intent upon honouring her father’s dying wish by marrying her indolent stepbrother…

A Winter’s Madcap Escapade - Elizabeth Bailey
A stranger hiding in Lord Dymond's coach pitchforks him into a chaotic enterprise to protect young Apple from her own folly - much to her indignation!

The Duke's Christmas Bride - Melinda Hammond
Waldo, the fifth Duke of Charingden, shows no inclination to marry. In desperation his family invite a string of eligible beauties to the Christmas Ball at Birklands for him to choose from, but the only young lady to interest the duke is little Clara Tillotson, who is herself desperate to avoid being forced into marriage….. A sparkling Regency romance with just a touch of snow!

My second release is last year's box set novella, A Merry Christmas Chase. If you missed it last year, then here's your chance to get a copy, since the box set is no longer available. 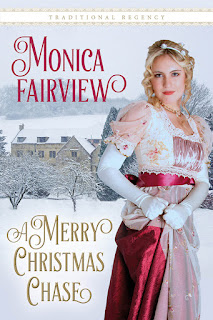 
When the new Earl at Sorrelgate Lodge catches Cherry poaching, she manages to escape before he discovers her identity. But the Earl is serious about catching his poacher and bringing “him” to justice, so Cherry flees to her estranged rich aunt. Imagine her dismay when she discovers that the Earl is a house guest there for the whole Twelve Days of Christmas! She quickly has to improvise to throw him off the scent.

Lord Carsdale is attending the Christmas house party to find a wife, but there is something very odd about Lady Ashburn’s niece. At first he does everything he can to avoid her, but soon catches glimpses of someone else behind the mask she wears. As Carsdale becomes more and more intrigued, he is unaware that she is leading him on a merry chase in which the boundary between the hunter and the hunted quickly gets hopelessly tangled.

A Sweet Traditional Regency romance that will warm the cockles of your heart.