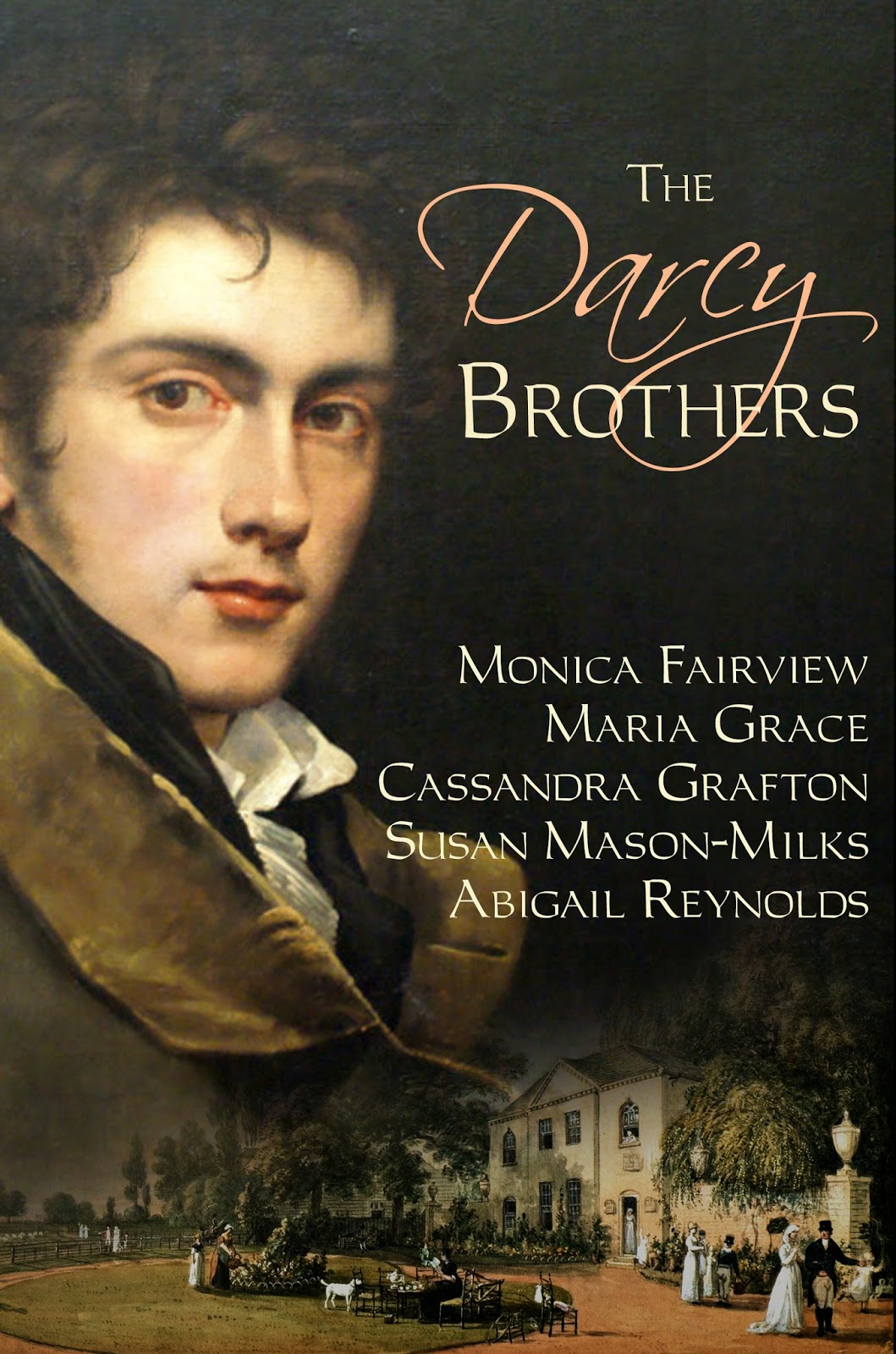 Imagine that Mr. Darcy has a handsome younger brother, Mr. Theophilus Darcy. Then imagine that Theo Darcy happens to be the opposite of Darcy. Where Darcy likes to keep things under control, Theo is easy-going. Where Darcy is awkward among strangers, Theo is a charmer. Where Darcy took his studies seriously, Theo was sent down from Oxford for his pranks. Where Darcy has shunned Wickham as a villain for years, Theo was once under Wickham’s influence.

What if Theo were to meet Elizabeth Bennet? Would he charm the young lady’s stockings off or would he help his brother win her hand?

Find out as the two brothers lock horns in this unique group-written Pride and Prejudice “what-if” variation.


Many of you may already have followed our group project The Darcy Brothers on Austen Variations, but if you haven't, you have a treat in store for you. We are now working on editing the final version and hope to get the novel out very soon indeed.

I'm particularly proud to have been part of the team writing The Darcy Brothers because it was an exciting challenge. Since we were posting live on Austen Variations every Wednesday, we had to do a tremendous amount of coordination behind the scenes to produce that chapter. The writing had to blend seamlessly. We had to discuss plot lines and character development and all members of the team had to agree on the direction we were going. But more challenging even was that The Darcy Brothers was a reader driven novel. Yes, you read it right. Each week, the readers were given three possible plot ideas and asked to vote on them. Which meant that we could not actually start writing until the readers had made their choice!

It was a tremendous amount of fun having the readers discuss in their comments which direction the story should take. Some of the comments were hilarious, providing wild alternative plot suggestions (Dave, are you there?). Others provided the stimulus for rethinking the direction we were taking in the novel.

As well as having very articulate readers to please ;) there were other complexities we needed to work out. Since the project consisted of twenty-four chapters spread over as many weeks, communicating with authors living in three different countries and different time zones had its challenges. Being consistent, especially when it involved a scene someone else wrote earlier, required constant double-checking.

Tailoring your writing to such a number of expectations was not an easy process. You could not go on a tangent and do your own thing, which was quite taxing for a group of creative writers used to following their individual creative muses!!

Overall, however, it was a wonderful experience of coordinated writing. Most importantly, I think the final product is pretty amazing. It's the result of many minds and many imaginations brought together to produce a wonderful story.

Here is an excerpt to give you a taste of the novel if you haven't yet sampled it. If you have sampled it, here is a freshly edited selection.


The butler met them at the door with a look of profound relief. “Her ladyship has been asking for Mr. Theophilus this last half hour.”


Theo laughed as he handed off his hat and gloves. “And no doubt blaming you and everyone else for your inability to produce me instantly for her convenience. Never fear; I will go to her immediately before she abuses anyone else for my absence.” He winked at Darcy before striding off toward Lady Catherine’s throne room. Even the prospect of a tongue-lashing from his aunt for some imagined sin could not suppress his high spirits. He had not realized how much he had longed for his brother to see him in a light which did not involve disapproval.


Astonishingly, Lady Catherine did not seem to be angered with him either, but instead had remembered several crucial pieces of advice she had not given him that morning. Or perhaps it was several hundred pieces. It certainly took her long enough to tell him her thoughts, but he stopped listening after the first few minutes. As long as he nodded, looked thoughtful, and occasionally agreed she had a point, his aunt was perfectly content to dispense her wisdom. Instead, Theo contemplated all he had learned at the parsonage. Miss Bennet might indeed be just what his brother needed.

Finally Lady Catherine wound down, and Theo thanked her for her fine advice and condescension. Even Mr. Collins could not have done better.

He had not yet exited the room when she said, “And one more thing, Theophilus. Tell your brother I want to see him. The settlement has waited quite long enough.”

Theo decided he might just wait a little before giving Darcy that message. It would put him in a foul mood, and he wanted to enjoy a little more pleasant time with his brother first. The settlement had waited for years already; it could wait a little longer.

He found Darcy staring into the fire in the sitting room, a glass of brandy in his hand and a dark look on his face. He narrowed his eyes at the sight of Theo.

Theo’s gut clenched. What could William possibly be angry about now? He could not have done anything wrong in the brief time they had been apart. Even if his brother had seen his behavior with their aunt, there would have been nothing he could object to. But Theo knew that look. He had seen it far too often.

Since there seemed no hope of companionable time together after all, Theo said, “Our aunt wishes to see you now.”

Darcy ignored him. “There is a letter for you.” His voice dripped scorn as he gestured to the small table by his side.

So that was it. William disapproved of many of his associates, usually for the wrong reasons, but this seemed excessive. How much damage could a letter do? He stepped forward to take the letter.

He shook his head when he recognized the handwriting. This particular letter could do a great deal of damage. Why did George Wickham have to decide to write to him at this particular moment? Especially since Theo had made it quite clear to him their friendship had ended that day in Ramsgate. Not that Darcy would believe it, especially with this evidence in hand. Clearly he had recognized Wickham’s hand as well, since the seal was still intact.

“You said you were no longer in contact with Wickham.” It was an accusation.

There was no point in prevaricating. He would rather get this over with quickly. “I have not been in contact with him, but he persists in sending requests for money. I ignore them.”

It was too much, after his earlier hopes that someday he and William might settle their differences. “Believe what you like. You always do, in any case.”

William held out his hand. “Give me that letter.”

Theo bit down on a scathing retort, then forced himself to speak calmly. “You may be the head of the family, but that does not entitle you to read my personal correspondence.”

“So you do have something to hide. Give it to me.”

Theo fingered the letter. There would be nothing of importance in it. He always threw Wickham’s letters away without a response. Well, this time he would throw it away without a reading. “I have nothing to hide, and no need or desire to know what Wickham has to say.” He drew out the letter slowly, but William’s satisfied look was more than he could tolerate. With a quick turn, he tossed the unopened letter into the fire.

“Damn you!” Darcy dove for the hearth and snatched the letter out, but it was already alight, a merry flame dancing from the end of it. Darcy, forced to drop it, stamped on it as he blew on his burned fingers. Smoke curled around his boot.

Theo crossed his arms. “There is an ember on your waistcoat. Playing with fire is dangerous, you know.”

Darcy glared at him as he brushed away the offending ember, leaving a black spot behind on the fine green silk. “You would know. You spend your entire life playing with fire.” He picked up the charred letter and unfolded it, causing nearly half of it to drop away in ashes. His eyes moved across the remaining portion, then he grew pale.

Despite his resolve to keep his distance, Theo could not help himself. “Is something the matter?”

His brother folded the charred letter with what seemed like unnecessary precision. “Nothing you would care about. It seems I will be leaving for London shortly, and I expect you to remain here and out of mischief.”

What had been in the letter? But he could hardly ask after having thrown it into the fire. “As you wish.” He opened the door and strode out, forcing himself not to look back at William.


Hope you enjoyed this excerpt! The Darcy Brothers will be coming out in February.