Winchester: A stop on the Jane Austen Tour

On Wednesday I took the train from Clapham Junction to Winchester to meet Laurel Ann Nattress (editor of Jane Austen Made Me Do It) and her Jane Austen Tour Group. Luckily, I didn't have to ride in a locomotive like the one below because it would have taken me a lot longer than the one hour forty-five minutes it took for me to get to Winchester where I was supposed to meet them. Though it might have been fun to chug along in the days when this steam-operated train (below) ran from London to Southampton, it would have taken me quite a lot longer!

﻿
As I passed through a quintessentially English scene with its gentle hills and its quiet "verdure" (Winchester is at the edge of the South Downs), I was surprised to see far more cows than sheep. The black and white cows reminded me of Switzerland, but only briefly. The small fields enclosed by hedgerows are too distinctive. It occurred to me then that, although we think of hedgerows as very much part of the English landscape, that wasn't necessarily the case when Jane Austen was travelling that way. The majority of English hedges were set up during the course of Austen's lifetime, as enclosure laws changed the look of the landscape and the spaces of open hunting grounds and public grazing land were cut up and clearly defined as private property.

Perhaps because it's autumn, when many of the golden fields have been harvested, and the weather is overcast and cold, but as I approach Winchester I find myself turning maudlin. Winchester is the city where Jane Austen came to die. I'm not usually one to linger over these things, but perhaps because I read The Mysterious Death of Miss Austen by Lindsay Ashford not so long ago, I can't help feeling that Winchester is one place where I can't follow in footsteps of Jane Austen because by the time she reached Winchester she was already too far gone to be able to leave the house. 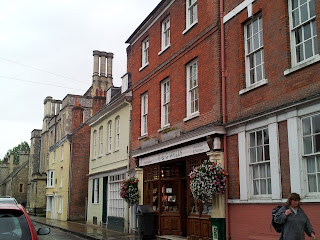 Which is a shame, really, because Jane would have loved Winchester, and there was a lovely little bookshop right next door to where she lived which she would have enjoyed. 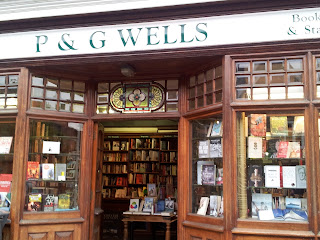 The bookshop is clearly old, with old wooden fittings and the small  windows typical of 19th century establishments, so I went in to ask if they had existed at the time of Jane Austen.

A very helpful and knowledgeable woman working in P&G Wells who is a history enthusiast showed me a booklet outlining the history of the shop. Here is the cover. 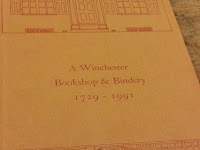 As you can see, at the time of Jane Austen it would have also been a bookshop (with a different name), though since then it has been spruced up and given new glass with a beautiful art deco motif. A photo of the shop taken at the turn of the century gives us a glimpse of Jane Austen's house, which at that time had railings (melted down for the war effort, apparently).

I didn't stay gloomy for long, though. Another Jane was with me -- Jane Odiwe -- and a friend of hers, Caroline. I'm sure you're familiar with Jane O's work but she's the author of Searching for Captain Wentworth and Mr. Darcy's Secret. We snapped photos in the rain and I admired Jane Odiwe's parasol-like umbrella. 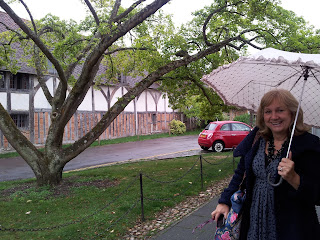 Then it was time to meet Laurel Ann and her Janeite crowd in an English pub that was having a very hard time adjusting to American demands. Iced water in a pitcher? Ordering at the table? What was going on? The poor waiter struggled unsuccessfully to cross the [English] language barrier as conflicting expectations clashed. When he finally gave up and said everyone had to order at the bar (which is the normal thing at a British pub), everyone looked so outraged he had to quickly backtrack.

But what a lovely evening when you're surrounded by a large group of people who all want to talk about Jane Austen. I also enjoyed hearing about the tour member's impressions of England. To top it all, I had the pleasure of meeting Nancy Kelley (author of Loving Miss Darcy and His Good Opinion) and Lynn Shepherd (Murder at Mansfield Park). Nancy and I had a great chat that included Dr. Who, her favourite Steampunk authors, and having fun with Darcy. If you want to know more about our conversation, Nancy has a great write-up on her blog called Having Fun With Darcy.

Tomorrow the weather forecast in Bath is for some rain. I wish I had a parasol/umbrella like Jane Odiwe's!