My attention was captured today by the picture on the left, especially because I loved the caption The Guardian attached to it:
‘This brave creature made a one-swan sitdown protest in the middle of Kew bridge, south-west London, causing traffic chaos for over an hour before it remembered that is was mute and therefore incapable of communicating its demands or having them met. Whereupon it flew gracefully away. And the Daily Mail Scoffs: As excuses go, it sounds unlikely - 'Sorry I'm late, I got held up by a swan'.

The picture resonated with me in several ways. The first was that it reminded me the flock of geese that impeded Caroline Bingley on her way to Pemberley in The Other Mr Darcy. She certainly had the excuse: ‘Sorry I’m late, I got held up by a flock of geese’.

It also resonated with my new novel, The Darcy Cousins, in which swans are featured as a centerpiece -- so to speak. Both editions of my novels have swans on the cover, a reference to a boating trip Georgiana Darcy takes on the river Thames. And of course Kew Bridge is down the road – or river – from Richmond, where an important scene in the novel occurs.

Fortunately for Georgiana and her companions, she did not take her boating trip in the third week of July, otherwise she would have found the river rather crowded, since that’s when Swan Upping takes place. 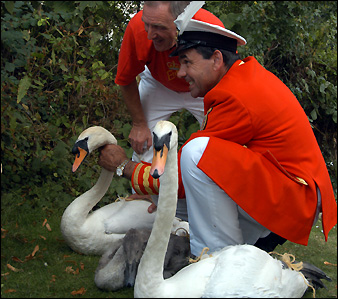 Swans have been part of the Thames landscape since at least the 12th century. In the 15th century, a Royal Charter established Swan Upping, in which a swan census is taken and young cygnets are marked. By this Charter, the swans on certain areas of the river were divided up between two Livery companies and the Crown, the “Seigneur of the Swans.” Accordingly, three different groups of skiffs round up the swans on the river and mark them: those collected by the Dyers (cloth dyers) are marked once on the bill, those collected by the Vintners’ (wine merchants) are marked twice, and those caught by the Queen’s skiffs are left unmarked, since by law all unmarked swans in a certain area of the Thames belong to the monarch (the marks have been replaced by identity markers). While originally this was done because swans graced the royal table, this has not been the case for a long time, and the ceremony now serves an environmental purpose, which is the protection of mute swans.
This ceremony takes place only in specific areas of the Thames. Traditionally, the swans in other areas had other owners, and were marked in various ways to indicate ownership. To see the markings that were still registered in Georgian and Regency times, follow this link.
Mute swans have for the longest time symbolized harmonious love, since they mate for life, and their lives in the wild can be as long as twenty years. Male and female swans also share equally in taking care of their nest and their young cygnets.
And then there is of course the story of ‘The Ugly Duckling’, in which an ugly duck that ostracized by its fellow ducklings because it doesn't fit in grows up to become a beautiful swan. In the novel, Georgiana’s tries so hard to fulfill Society’s expectations, yet feels somehow that she doesn’t belong. The swan plays an important role in her understanding of who she is and what she wants.
All this to explain why I loved the picture of a swan sitting in the middle of the road, asserting its existence, and daring anyone to deprive it of its right to be there!
Email Post
Labels: Darcy Cousins Georgiana Darcy swan symbol