Finally caught up with Emma on the BBC iplayer, and I have to say I really enjoyed this episode. I confess that Emma grows on me. Now that I know where Welch is going with it, I rather like it. 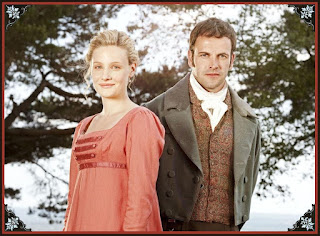 Much as I loved the previous versions of Emma, Garai's makes the most sense. It explains why she's so much into matchmaking: tied down to her father and his ailments, unable to travel and see the world, having few young people in Highbury to associate with. This is most definitely an aspect of Emma that is brought to light. The fact that she is childish and in need of guidance, too. In the past, I always wondered what she saw in Knightly (sorry, Knightly fans). But now I can see that she does need someone to keep her in check, and Knightly is perfect for her. The romance blossoms, by the way, and Knightly redeems himself as a hero.

I also loved the dancing. This is the first time I've actually seen the illustrations of Regency dancing put into practice, and I was delighted at the active and energetic dancing that they do. Now you can see why Mr Darcy disapproves of dancing, and why Knightly hesitates to dance. I had a sudden flashback to a scene in The Sound of Music (if any of have seen it) where Maria and Captain von Trapp are dancing a traditional Austrian dance, and they use the same dance move. Which makes sense. I have read about the waltz at the time being very little like our modern version of it, but this finally puts things in perspective.

A very nice scene, even if they don't say the right words. There's no conversation here about being brother and sister. It does come up later,  though, when Emma talks about him being an older brother. However, there is the GAZE, and it's very well done indeed! This is the first production I've seen that succeeds in bringing out the romance.

I'm very happy the whole thing is coming together.

Now for my daily question.

There’s been a lot of discussion of the “gaze” scenes in P and P 1995, the scenes in which Elizabeth and Darcy exchange glances. Which is your favourite gaze scene and why?
Email Post
Labels: BBC Emma Pride and Prejudice question